After one of the largest Climate Change rallies in the world took place in New York on Sunday, a lot of the common trends of opponents to enviromental reform came out. The People’s Climate March (PCM) was accused of being trash generating monsters and hypocrites. The hypocrisy thing has been around for the past 40 years ago and would require much more than the length of what I plan to say to address, so I will give someone else the pleasure of addressing it. It is necessary to address the critique’s of the PCM charging it with being a wasteful, hypocritical event.

To begin with, there were 400,000 people present. Most of these people were Americans, and many were New Yorkers. The amount of waste that was generated is being criticized for being left in the streets and not in “trash” cans. What if there are no trash cans because the NYPD is paranoid that they’ll have to shut down the city looking for backpack bombers? Would the New York Post’s response be, “Environmentalists Bring Terrorists and Death to New York.”

The amount of waste that was generated in sad in itself. Over 150,000 signs were left in the street. That is unacceptable of people to do, and they should try to reuse them or find some way to recycle them. However, many of these signs were handed out by the organizers of the event, and not brought by people. Several of the people I spoke with said they were given signs off the side of the street when they arrived. The organizers of the event should be contributing to trash clean up if they are going to be giving out many large signs. The masses of groups selling goods and handing out free 8 oz (236 mL) water bottles are generating much more trash, and of a worse quality.

Some have pointed out these signs are made of cardboard, and that the many people present are promoting the logging industry. So, having seen a few protests in the last year and photographs of previous years, especially in the 20th century, do people ever bring signs not made out of cardboard? A friend of mine told me I should’ve brought a small piece of metal that has a lab safety warning printed on it. That would’ve been awesome, except it’s unrealistic to expect everyone to be able to do that. Then again we’re not talking about people with reasonable expectations. Should everyone have bought solid plastics to write on the back of? Would they have pasted paper on the back so you could write legibly? The last I checked, trees come back in a human’s life time. Oil derivatives come back in a species’s life time. Many of the signs were also re-purposed from old cardboard. That is often what people do, since it’s free.

The real problem is the Starbucks coffee. Now why it was necessary to buy Starbucks coffee is questionable, but also reasonable in the situation many were in. It is physically exhausting to shout and cheer for several hours. My abdomen is still sore, and I’ve lost my voice. Water ran out before the march began, and we had to wait until about half way in to get more. I saw some people carrying their empty Starbucks cups looking for water refill stations. This was at about 11am. At around 2pm, a friend of mine, pretty exhausted, said to me, “Look…I can go to Starbucks for just a minute…it’s worth it.” A woman next to us looked at him and said, “Oh you’re not going there. You’re going to hold out.” He stayed with us. He didn’t get some burnt and overpriced coffee. Maybe some of the older people in the crowd couldn’t hold out and had to buy a coffee. Are they now hypocrites who aren’t allowed to comment on the status of the overall trend of the climate to be changing?

Lastly, maybe these same people should comment on the massive waste and destruction caused by other people. Here’s some mountains that don’t exist anymore. 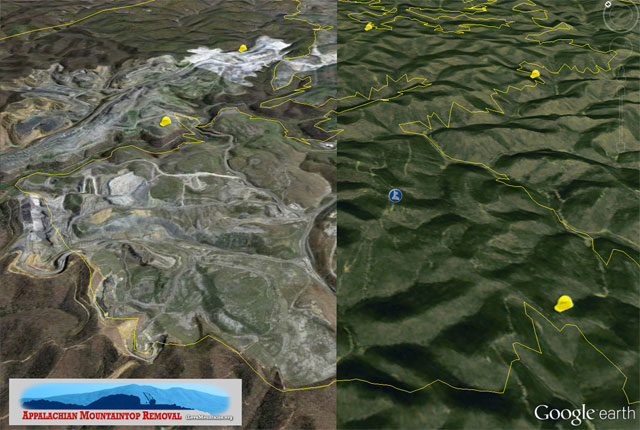 Credits to Google Earth for the image.

Thanks, and keep on fighting.